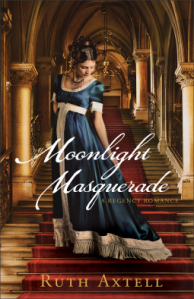 Lady Celine Wexham seems the model British subject. French by birth but enjoying life in 1813 as a widowed English countess, she is in the unique position of being able to help those in need–or to spy for the notorious Napoleon Bonaparte. When Rees Phillips of the British Foreign Office is sent to pose as the countess’s butler and discover where her true loyalties lie, he is confident he will uncover the truth. But the longer he is in her fashionable townhouse in London’s West End, the more his staunch loyalty to the Crown begins to waver as he falls under Lady Wexham’s spell. Will he find the proof he needs? And if she is a spy after all, will he do the right thing?

Ruth Axtell deftly creates a world where black and white burst into a confusion of colors and no one is who they seem. Readers will be hooked from the very first scene to the final page.

This book was a wonderful read. Kept wondering how it would all end. Ruth did such a good job of developing the characters, even the secondary ones. They felt like real people, especially Valentine. Their personalities and choices were appropriately designed to provoke the right emotions from a reader.

I must say Ruth is very skilled in the storytelling craft. I kept wondering how the story would end in a tolerable way and I must express my satisfaction at how it did.

The emotions provoked in this book are so strong that sometimes I felt I was there somewhere in the scenes, standing at a corner and watching the events right before my eyes! And if I really were, then I must say that don’t let the book cover fool you. Celine, the main lady character, is a lot prettier than she appears on the cover (at least that’s what my mind says!) lol. I only wish Rees were on the cover too. But hey, I’m quite satisfied with the image my mind conjured up and wouldn’t want any pictures messing it up anyway. Point is, Ruth did a marvelous job in describing her characters—loved it!

And all I can say about Celine’s and Rees’ love story is that it is very, very intriguing. If you want a clean/inspirational romance full of intrigue, I beg you please, go for this one. You won’t be disappointed. I must be clear though that if you are interested in this book for the espionage, there isn’t much about it. It is more about the romance story of these two people.

*Although I offer this review to the public, it is my opinion and simply that. Many thanks to Revell and Net Galley for a temporary ebook copy in exchange for me honest opinion.*

Ruth knew she wanted to be a writer ever since she wrote her first story–a spy thriller–at the age of twelve. She studied comparative literature at Smith College, spending her junior year at the Sorbonne in Paris. After college, she taught English in the Canary Islands then worked in international development in Miami, Florida, before moving to the Netherlands, where for the next several years, she juggled both writing and raising her three children.
In 1994, her second manuscript was a finalist in Romance Writers of America’s Golden Heart competition. In 2002, her sixth manuscript took second place in the Laurie Contest of RWA’s Smoky Mountain chapter. The final judge requested her full manuscript and this became her first published book, Winter Is Past, which was spotlighted in Christian Retailing magazine. Since then, Ruth has gone on to publish thirteen historical romances and one novella.