This is a blog tour stop for my upcoming release, To Die Once, an inspirational romance in the Child of Grace book series! These poems were composed in honor of the release of this book. Stay tuned for part III, IV, V, VI & VII in the coming Sundays!

Part I ~ The Love Story

This is a love story

Not one full of glory

Diced with thorns, but not gory

Oh, just listen to the story!

Come together as hinged carts

But soon came along piercing darts

It began with a simple kiss

Full of passion and even bliss

But oh did they miss

That without God their love was a diss

You could see they felt so alive

Much more than bees in a hive

Cos they swore to love’s depths they’d dive

But soon the winds of trouble came blowing

The thorns beneath the roses unfolding

Vowing to wrench out  a love still growing

For a while the quiet stole the waves

That even God, full of mercy Who saves

Seemed far, faraway beneath many caves

So that their sorrow attacked fiercer than warrior-braves

Then lo, one morning, a horse–Sebastian woke

With his brothers, with pain that could choke

Jennifer knew to save him she couldn’t joke

So her silence, her vow of silence, she then broke

Along came a strapping bloke full of love and hope

Stefano’s m’name, he sang with a heart he swore could cope

And it was clear her answer was a mean “nope”.

Before long she was smiling because he cared–so gentle

But the buried truth of the past just could not settle

It spoke, it lashed, bubbling like hot water in a kettle

But thank God He commanded the storm to settle

His Word He knew wouldn’t come back to Him void

He rebuked the serpent, yes, even the boid

But be restored in grace and love, no longer lost in the void

The fun, the jokes, oh they could tingle!

So we’ll be friends forever they promised with merry jingle

We’ll grow as kindred spirits and not as single

“Is there anything that can separate us,” Chidi would ask

“Oh no, my friend!” Jennifer would smile–in it you could bask

Is it true, Jennifer would ponder, that friendship could be a task?

Then an act of sweetness would prove Chidi wore no mask

We love God, we love songs, and this way we’ll stay!

No need to worry about a party, we’ve got much to say

But we wouldn’t mind those fruity drinks on the tray!

But lo, one day a man walked in

He vowed then that her heart he’d win

Even if it meant plunging her into sin

“My friend, he’s no good for you,” Chidi pleaded

“Would this man be the bane of our friendship kneaded?”

“Maybe, yes, if you won’t be the friend that’s needed.”

A heavy sigh, a long face, sadly, that was the case

They went their separate ways after a short embrace

Laughing hard at shattered hearts with no heartbeat trace

But love known, love grown can never be forgotten

No matter what, two sister’ll survive a past that’s rotten

They would bind and heal where the other is hurting

This was the sweet tale of these two hearts supporting

A friend in need is a friend indeed

Is like a good soul with a heart to feed,

Nurture, repair and plant a seed

One showed this kindness to the other

And the trust broken was put back together

So the troubles did come and go

The lessons they learned would stay so

And may God by His grace keep us so

This prayer they made into a song

Promising their friendship this time would last long

That together again, they’d grow strong

You can be one of the 10 winners of To Die Once every week, making a total of 70 ebook winners in all! Just go to my facebook and join in! This giveaway is international. 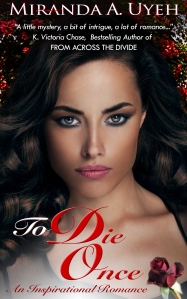 Two men, one woman, a rosebush …

… a terrible past, an uncertain future

Jennifer, a woman unexpectedly trapped in a path of love and passion against everything she believes.

Rodrigo, a man set to get what he wants at the cost of what matters most.

Stefano, a man with a past, a story to tell and passion to offer.

From a culture where good girls follow the norm and live as they’ve been told, Jennifer is no different from any other girl until by happenstance, she meets and falls in love with Rodrigo, a man who’s handsome, rich and foreign. Different. She has no idea who he is or what he does, and is swept into a world of romance and passion. It is not long before she discovers a shocking truth that shakes both her world and his.

Then he is gone.

Stefano shows up at a time when Jennifer has made up her mind about the rules of life. He thinks she’s beautiful and is in love with her. In a bid to convince her to give him a chance in her life, old memories once buried are brought to life. And the events that follow don’t leave anyone unaffected by the truth of the past that was left unsettled.

Meanwhile, Jennifer with her friend Chidi, find themselves on a self-discovery journey that has one of them raising questions.

Some just have to ask, where is God in all this?

… an inspirational romance, from Lagos to Italy.