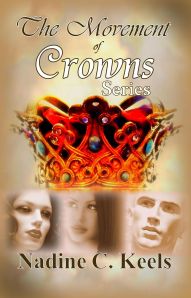 The Movement of Crowns

At the point when kingdoms’ ideas of humanity differ… The nation of Diachona is celebrating the twentieth birthday and rite of passage for Constance, the Diachonian king’s daughter and heir. Yet, the pause for festivity doesn’t erase collective doubts about Constance’s aspiration for a place with the men on the National Council, nor does it eliminate fears roused by oppressive threats from a neighboring, powerful empire. Amid increasing rumors of war and personal misgivings about her own future, Constance deems this an inopportune time to be falling in love with one Commander Alexander. Will Providence keep them all through international tensions and the changing of times, or is Diachona watching its territory in vain?

The Movement of Rings

A time to remember what lies deeper than one’s fears… The Mundayne empire has seen years of prosperity under the rule of King Aud, a man of war known the world over for his ruthlessness. Naona, a high-spirited imperial servant who holds Aud’s favor, occupies herself with pulling pranks on her peers around the king’s estate, but the time for laughter spoils when the citizens of Munda begin to oppose increasing taxation. After meeting the princess of Diachona, Naona finds herself having to choose between maintaining loyalty to her king and becoming a personal ally of another nation. With the rise of unrest in Munda, can Naona’s heart survive intact: intact enough, even, for an unforeseen chance at love with a foreign man?

The Movement of Kings

The order of things, the nature of succession, and a nation that must march on… At a time of political and cultural uncertainty, the charge of the Eubeltic Realm has been passed over to a young monarch known for his intelligence, agility, and brooding ways, as well as the “way” he has with vibrant ladies at court. Can this inexperienced king handle the current rise of domestic and colonial crises, the bereavement of his family, and his curious attraction to a councilman’s unassuming daughter, or is everything in his untried hands on the verge of falling apart?

The Movement of Crowns

This story centers on Constance, the first woman heir to the throne of the Kingdom of Diachona. This isn’t the only change that has come to the kingdom in recent times, so events don’t go down well with the royal council and the people in general, but only in a polite sort of way. The story lets us see how Constance grows into the awareness of her people’s expectations, but through the love and support of her father, the king, she is able to achieve far more than the people would expect from any male heir. She even helps her father’s council device a solution for an impending doom that awaited the kingdom. Not only does Constance discover herself, but the people recognize her potential as the future Queen of the kingdom.

I loved that King Matthias remained unwavering in his decisions, which not only helped Constance grow into a confident woman, but was key in saving his kingdom from trouble. Issues like the place of a woman, and whether she should be given power were satisfactorily taken care of, but in a subtle manner that didn’t overwhelm the plot. Also, it was clear that patience and steadfastness were the virtues that triumphed, when certain characters refused to allow culture and politics to stand in the way of the greatness that eventually came to Diachona.

The Movement of Rings

Here, the setting changes, but the events occur simultaneously with the story in book #1. It centers on a young woman, Naona, the favorite concubine of King Aud of Munda, a neighboring kingdom to Diachona and its biggest threat in book #1. Naona happened to be assigned to Princess Constance when the princess visited Munda, and Naona, through her brief association with the princess, came to see that indeed there was more to life like she often dreamed. And before Constance left for Diachona, they both promised to keep in touch. The encounter between the two forever changed the course of the story.

It was interesting to follow Naona. Even though her life seemed bound to a certain course. She didn’t lose hope of a life of love, children, and family. Her strong will and firm belief in God certainly led her down an unlikely path which resulted in not only her emancipation, but that of her people, too. What struck me the most was that she decided to use her position in the palace—no matter how low-placed—to achieve a mighty feat. Of the three stories, this one is the most peculiar.

The Movement of Kings

I was sorry to see certain characters exit the story.

The hero, Alexander, is the most eccentric I’ve ever encountered in a book world. It was interesting to follow how the author intentionally crafted him this way. There is a plainness to the overall story that lets you see the beauty of ordinary living through the eyes and thoughts of a young man trying to find his way in the midst of a lot of criticism. At the end of the day, he discovers love with the most unlikely person and learns that the very thing that makes him different, is what makes special and standout. It also serves him well as the king in discovering the solution to a problem in his kingdom. Unlike book #1 & #2, which are fairytale-like, this book has some solemn moments. But it doesn’t end on a negative note. In fact, it is positive in a realistic sort of way.

Note: There are parts of the story (talking about the entire series) that is written in a narrative manner, as opposed to delving into details, so that it somewhat appeared rushed. I fully understand the author’s intention to inform the reader and fill in certain gaps in the story. This, however, didn’t disturb the story much or take away the reading enjoyment.

This is a wonderfully written book. The author has a strong authority and sense of language which makes her prose style unique in a modern Shakespeare sort of way. I will certainly be looking out for other books by Keels!

*Although I offer this review to the public, it is my opinion and simply that. Thank you, Nadine C. Keel, for a free copy in exchange for my honest opinion.

Nadine. A French name, meaning, “hope.”  Spreading hope to her readers and listening audiences, author, editor, and speaker Nadine C. Keels of Seattle, Washington is well-known for The Song of Nadine, the powerful lyrical poetry seen in four of her several books and found on her spoken word album, Hope. Lyricized. Drawing from her lifelong passion for highly enjoyable and transformational fiction, Nadine has written a number of novels and novellas, including Love Unfeigned and The Movement of Crowns Series. In response to inquiries from other aspiring authors, Nadine put together a simple reference entitled Write Your Genius, Genius!: A Rather Quick Guide to Book Writing. Being the founder of Prismatic Prospects, a communication company based in Seattle, Nadine has served as editor and co-editor for a number of titles, and it is her aim to be a proven wellspring of inspiration for creativity and innovation in the marketplace.