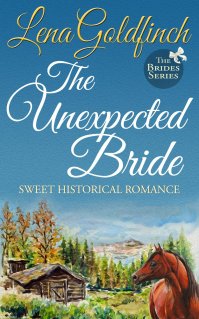 What’s a man to do when his father orders him a bride?

If logging-operation owner Isaac Jessup had wanted a bride, he’d have chosen a sturdy frontier woman, not some fragile lady from back East. Ready to explain the mistake, honorable Isaac takes one look into Rebecca’s vulnerable eyes…and knows he’ll marry her, even though this delicate waif is obviously unsuited for wild Seattle.

Can an unexpected marriage ever be a match made in heaven?

This is one of the best books I’ve read this year. Once again, Lena Goldfinch didn’t disappoint with this piece. It’s amazing how her author voice remained strong and true to the plot elements and settings despite the change in genre (she’s published YA/Romance before now). Her attention to detail—even the language attitude of the historical setting—was delightfully brilliant. There’s a right mix of emotions, humor, and every other flavor needed to make a story just right and enjoyable, including excellent pacing.

This story is partially based on the story of Isaac and Rebecca, but it’s not Biblical fiction. Goldfinch went ahead to take the lead in crafting the story of the characters to a fine finish. I especially enjoyed watching the building blocks of Isaac and Becky’s relationship come together. Each character’s monologue made a lot of sense—this was the meat of the story. The theme rang true to me on a very deep level—there’s nothing wrong with being different from the people around you. That you didn’t turn out as intended by someone’s standard, and like everyone else, and so you don’t fit in, doesn’t mean there’s something wrong with you, or that you don’t have a place in this world. God has prepared you EXACTLY the way you are, for a reason, and for a place, and has determined the time that you will glow, rise and shine. It may be a difficult journey to this place, but God who hears the prayers and cries of our hearts, will certainly lead you there if you’ll just hold on.

Altogether, this was a wonderful read with a poignant message that blessed my heart.

*Although I offer this review to the public, it is my opinion and simply that. My appreciation to the author, Lena Goldfinch, for a free copy in exchange for honest opinion.

The lean-to was chilly and not for the first time, Isaac considered boarding it up proper and calling it a barn. He sat on the stool and began milking the goat, all the while mentally preparing for the worship service they planned to go to later that morning. The Scriptures he’d read first thing that morning were fresh in his mind, and his prayers kept returning to the problem of Rebecca. One inner voice urged him to send her back home, but another voice spoke of commitment. He’d said vows before God to love and keep her till death do them part. Those weren’t words he was willing to dismiss lightly.

“What’s her name?” Her voice was suddenly in his ear, quite close.

Isaac jumped. The goat bleated at him.

“Sorry, girl.” He patted her side and resumed milking her with slow, careful hands. He glanced over his shoulder toward the subject of his thoughts.

Rebecca stood watching him, leaning over the rail and peering in at them with curious eyes. He was surprised to see her out this early. She usually left him to his morning chores, and most times he’d get back inside the cabin and find her already up preparing breakfast.

“What’s her name?” she repeated.

“Name? The goat?” He looked at the goat dumbly. It was a goat. He’d never gotten much further than that. She gave them a daily supply of milk, but other than that she was generally a nuisance. She liked to butt down the stall door. And whenever she got loose, she’d eat what few vegetables he was able to grow in the summer. She also liked to nip at his shirts and underthings when he hung them out on the line–if he was lucky. Most times she’d tug the whole line down and drag it through the mud.

“Yes, the goat,” Rebecca said, a pleasant-sounding smile in her voice. “Don’t tell me she hasn’t got a name?”

There was something nice about hearing a woman’s voice in the morning. It reminded him a little of when he was young, and his mother had chatted with him in soft tones while they ate breakfast. As if speaking too loud would jar them too quickly out of whatever dreams they’d had the night before.

Rebecca’s soft voice put him much in mind of those times.

“All right. I won’t.” Isaac focused on his milking.

“Never gave it much thought. She’s good for milk, but other than that she’s nothing but trouble, always munching on the laundry.”

“Well, then I think your choice is clear. Either you call her Milky or you call her Trouble.” Her teasing tone brought a reluctant smile to his lips.

“Well, then, if I have to choose, then I guess she’s Trouble.”

The real Trouble was standing behind him, her elbow propped against the top of the rail, her chin cupped in one dainty hand. 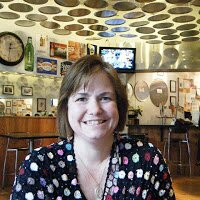 LENA GOLDFINCH writes romance and fantasy for adults and teens. She’s a sucker for a good old-fashioned romance, whether it’s a novel, novella, or short story, young adult or adult, fantasy or realistic, contemporary or historical. Elements of romance, fantasy, and mystery have a way of creeping into her writing, even when she’s writing historicals or something light and contemporary. Lena has been a finalist in several national writing contests, including the RWA Golden Heart and ACFW Genesis contests. She lives in a scenic small town in Massachusetts with her husband, two kids, and a very spoiled Black Lab. Visit Lena at www.LenaGoldfinch.blogspot.com.