Remember the Goal is a movie which tells the story of 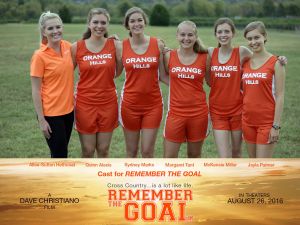 a young woman who’s just graduated from college and becomes coach of the girls cross country team in a private Christian school. The coach being quite young and wise for her age, chooses to impart wisdom to the girls covering many issues in the story, as she coaches them.

This is will be the fifteenth film by the Christiano Brothers of Five & Two Pictures—the producers of Time Changer, A Matter of Faith, and The Secrets of Jonathan Sperry—and the first ever movie about a girls cross country team. It is set to release in theaters across Southeast, USA, on August 26th.

This is a story that will help build the strength of togetherness in families, faith, hope, and love, as well as encourage teens to pursue their God-given purposes.

“We hope to start a movement among teens called 10:31 with this inspirational dramatic movie about a girls cross country team. 10:31 is based on 1 Corinthians 10:31 from the Bible which states, ‘Whatever you do, do all to the glory of God.’

“That one verse alone takes your eyes off of self and puts it on the Lord,” said Christiano. “That one verse is life-changing. It’s also liberating and very stabilizing.”

To get more information about the movie, visit the Five & Two Pictures or the REMEMBER THE GOAL Facebook.