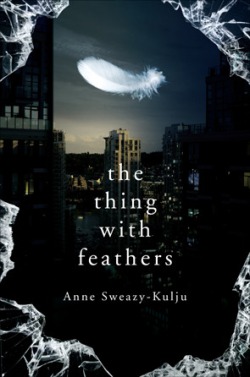 As the inhabitants of Cloverdale, Oregon, welcomed in the twentieth century, they were not unaccustomed to hard times and thorny situations. Small communities banded together for protection and hope. Heroes and villains were often difficult to decipher.

When an itinerate Baptist preacher arrived with his baby daughter and a wife lost on the trail, there was no one prepared to suspect what lurid secrets and heartbreak he might be concealing. As the preacher sets his sights against those who might oppose him, the names and the lives of the good people of Cloverdale may not be spared.

Yet in the midst of the machinations of a mad man, virtue and valor can persist. The Thing With Feathers is known to fly through wars, depressions, and natural disasters. Will the Marshall clan and the good people of Cloverdale find it in time?

A truly heartrending story that inspires hope, The Thing With Feathers was written with a softness that is incredulously brilliant, andwith a strength that jumps off the pages, it’s almost tangible. Every character was designed with the intent to explore the topic of faith preciously intertwined with the kind of hope that patiently waits for God’s justice and reward. Heartbreaking with almost every penned letter, it eventually doesn’t leave the reader with a sense of loss, but with the deeper understanding of what it means to be righteous in a fallen world where injustice tends to rule the day.

The Thing With Feathers is a brilliant prose that will leave you breathless, and in tears—not for the faint of heart!—but will also incline you towards a God that rewards either in the life or the next.

*Though I offer this review to the public, it is my opinion and simply that. My appreciation to the author, Anne Sweazy-Kulju, for a free copy in exchange for my honest opinion.

Anne Sweazy-Kulju is the daughter of a History teacher and granddaughter to an Irish storyteller, so it’s small wonder her genre of choice is historical fiction. She moved her family from Southern California to Oregon’s coast at age 31, purchased a 1906 Victorian, which they turned into a B&B Inn, and crossed one off the bucket list! Two years later, Sweazy-Kulju suffered disabling injuries in an auto accident and had to sell the Inn. She turned to writing.

Turns out, she has a knack. Sweazy-Kulju is currently the author of three Pacific Northwest/Western-themed historical fiction novels with a fourth in progress. Her debut novel, “the thing with feathers,” is a noir saga, but well-received. The Innkeeper-turned-writer’s second novel, “BODIE”, was awarded a silver medal for Original Softcover Fiction at The WILLA Literary Awards in 2014. Her latest release, “Grog Wars,” took 1st Place in the international writing competition held by WritersType.com, in March 2013. The book has also won three Reader’s Choice 5-Star Reviews, and was a Global eBook Award nominee. Sweazy-Kulju has won honors for short stories and awards for editorials, as well. Fans may even come across a somewhat rare, self-published recipe book from her inn.