What do you see in humanity? What is it you look for in a person? How do you help them achieve the best version of themselves?

These are EPIC philosophical questions true to life reflected upon daily, minute by minute, for a Director, Writer, and Producer of a film and/or play.

For me, stories that make the biggest impact and impression are those that exhibit the truthful struggle and success of living an authentic life. And, if the journey makes me laugh along the way, that joy seals the deal. The experience lives within me beyond and off the screen. What more can you ask for? Although, it is a lot to ask! (Laughs)

How did I come to be chosen and accept dual responsibility as Assistant Director and Actress, portraying the supporting character of NANCY, for the new original web series Brooks Family Affairs? Well, I’m glad you asked! (Laughs) I’m all too excited to elaborate!

When good things happen, they tend to occur all at once. Would you agree?

On the evening of Thursday, May 11, 2017 at 6 pm, I attended the table reading for a new sci-fi short film entitled The Key that I had been hired to assistant direct as the actor’s director in Nashville, TN. That night I was re-introduced to Lance Ogren who jumped on board as my 2nd AD.  This was my second-time meeting Lance.

Our first encounter was on Sunday, April 8th of this year (just a month prior) in Bowling Green, KY for an Audition Prep and Cold Reading Workshop I taught for V and C Talent Agency. Lance attended as an actor and I was inspired by the script work and actor’s journey we accomplished in such a short amount of time. I will never forget his riveting and thought-provoking performance.

As I always say, “As artists and people, we are destined to, and capable of being MORE than one thing!”

Fast forward back to the close of the table reading on May 11th, Lance hands me the full script for his entire new Directorial endeavor Brooks Family Affairs. He informs me that he wants me on board as Assistant Director and he needs an answer ASAP because shooting commences in just three weeks.

I leave the rehearsal with script in hand thinking and praying about his proposal. That very same night, I get home late, nearly an hour has gone by, and I see a missed phone call. I listen to a voicemail from Lance who is also offering me the role of NANCY.

WOW! TWO offers in ONE night! What more could a woman in film ask for?! (Laughs)

The early morning of Friday, May 12th, the very next day, on a long commute back into Nashville I began to read aloud for myself and commuter copilot the full series, the characters and all, and I could not put the script down! En suite, laughter accompanied our discovery of every new introduction and scenario on each turn of every page. I instantly fell in love with Brooks Family Affairs, co-written by female Screenwriter/Producer Bridget Vaughan. On top of that, I also fell in love with the character of NANCY. I had to play her!

By noon, same day, I submitted my signed contract to join this fearless film family. With a follow-up email to Bridget, the Writer/Producer, and to Lance, the Director, I spoke of how much I relished the audacious and dynamic humor within this new creation and how honored I was to be invited to join the ranks!

On Sunday, May 28th, we dove into our very own table reading of the full series with the cast. The eager energy of all involved was and remains positively contagious!

Then, the following Sunday, June 4th, began DAY-1 of shooting.

The teamwork of Lance Ogren and Bridget Vaughan is inspiring! How did these two find each other? That’s a story for another day! (Laughs) I commend them for the array of talent, both cast and crew alike, that they have envisioned and united to conduct and share laughter within people’s homes.

It is my prayer that Brooks Family Affairs, a comedy about a family launching a brand-new restaurant and all the hilarity that ensues when working with family, becomes a mainstay and household name. Structured with a solid ensemble cast, get ready to fall in love with LYDIA, the matriarch, FRANK, the patriarch, their children, DEXTER and SIMONE, UNCLE DANIEL, and all the people in-between!

You can subscribe to Apolonia’s Arts Newsletter for future updates on Brooks Family Affairs here. 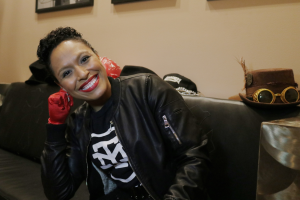 Apolonia Davalos (AEA/ WIFT-Nashville and TWIFM Member) is a film and Off-Broadway theater director and actress. She is named after APPOLLONIA, an ancient, biblical town, in Macedonia, Greece, south of Lake Bolbe, known today as Nea Apollonia. Hence, she was born with a passion for God and love of history! Her short, modern-western film, Children of War, screened through the film festival circuit 2016 – 2017. As an actor, her feature film credits include: “Summer of ‘67” (in post-production), “The Good Book” (on DVD), “Providence” (on DVD), “The Perfect Wedding” (on DVD), etc. In theater, she received great acclaim for the originated role of LYNN CORDERO in the Off-Broadway production of Looking for Billy Haines in Times Square (NYC). Other theater credits include: A Midsummer Night’s Dream (The Nashville Shakespeare Festival); Metamorphoses (The Boston Actors Theater): The Crucible (Salem Theatre Company); and Sisters of the Church (Afrikan Women’s Repertory Theatre). She is further recognized as a producer, director, writer, as well as an inspiring advocate for classical Greek theater through her production company APOLONIAD Productions. Known for her hearty laugh, talent for accents, love for martial arts, and singing classic 1930’s tunes!  “Apolonia Davalos is a passionate, young director dedicated to exploring the plays of Euripides. As a member of a generation used to reading no more than 140 characters at a time, her devotion to a classical poet is worthy of tremendous admiration.” – Show Business Weekly.

The article, Woman In Film: No Producer? Produce Your Comedy Yourself! That’s What She Said!, first appeared on TBAP.