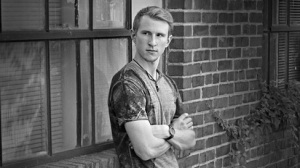 Matthew Parker, a brilliant artist, released his debut album, Adventure, on May 10th (read the TBAP review here). Adventure is full of many stories and God’s Word so that altogether, the album is a thrilling combo of encouragement and entertainment. The generally pop album reveals some of Parker’s experiences and his interesting views of life as a Christian who serves and sings for God. Matthew Parker graciously took the time to answer some questions on TBAP today. Follow our interesting conversation below.

Miranda ~ Hello Matthew! Good to have you on TBAP today! Please tell us a bit about yourself.

Matthew: Hey! Good to be here! So here’s me in a nutshell: I grew up in Michigan in a large family. My parents had 8 kids, and yes, it was always a party with that many kids in the house. When I was about 12, I started learning to play guitar and drums, and soon my brothers and I began “jamming” in our attic almost every day. We even tried writing a few songs, which were very amateur and kinda terrible, but hey, we tried. From there, I began getting into writing my own songs by myself and recording them on the family computer. It really took off. I just couldn’t stop, and I learned the art of studio recording and mixing, and even electronic music production with synthesizers and all that good stuff. I’ve been making music now for about 10 years, and there are no signs that I’ll be stopping anytime soon. I love making music that will make people feel something.

Miranda ~ How did you become a Christian? What’s your story?

Matthew: Growing up, my family was a Christian, church-going family, and I was immersed in the Bible stories and theology all the time…soon enough, I had to decide if I was really going to “own” these truths I’d been taught, or if they were just the things my parents believed. I don’t really know for sure when it was that I believed and trusted in God and Jesus’ death for my forgiveness, but I know that I was a young teenager when I began to take it all more seriously.

Miranda ~ When did you realize you would go into music professionally? Is there an event that led to that particular decision?

Matthew: When I first began making music on my own, music was just a serious hobby. But as I kept on doing it for years, I knew it was my passion and I didn’t want to do anything else. I also knew that I’m a creative person, and if I had to do a nine-to-five job for the rest of my life, I’d go absolutely insane. So at some point, it really wasn’t even a decision I had to make…it was just the thing I was doing and wasn’t going to stop doing.

Miranda ~ Your lyrics are deeply metaphorical—why this style of songwriting?

Matthew: I’ve always been intrigued by things shrouded in mystery and wonder, like something out of a dream. I just get bored sometimes with things that are tangible and basic. And lyrics sometimes give me some fascinating mental pictures. So I’ve always loved writing lyrics that are metaphoric and really play on your imagination instead of just saying exactly what I mean. You gotta have that element of wonder and awe in music, or it’s just some more words and sounds.

Miranda ~ Who are the people that have inspired your choice of music, and, particularly, your style of songwriting?

Matthew: Musically, I’ve been very influenced by artists like Michael W. Smith, Chris Rice, Imogen Heap, Zedd, Skrillex, Owl City, and many others, but in the realm of songwriting, I’d have to say I owe the most to Adam Young of Owl City and Chris Rice. Although they’re very different artists, they both have that sense of dreaming, imagination, wonder, and awe that I mentioned before. They paint word pictures and they’re very positive and hopeful in their songs. Of course, you can’t forget the emotions and “the feels” that they write into their tunes. I’m very thankful for all of the artists who have influenced me, but these ones especially.

Miranda ~ Who are the people/audience you believe you’re called to write/sing to—those in despair, the general Christian audience, the lost etc.?

Matthew: To be honest, I’m still kind of figuring this out. I guess I’ve come from a place where I was writing to Christians, because that’s what Christian music basically is (For the most part, the secular crowd doesn’t listen to Christian music). But in the past few years, I’ve been thinking that I don’t want to make music just for Christians to listen to, because…well, what about non-Christians? So my philosophy in the past few years has been to make good music that both Christians and a secular audience can appreciate. C.S. Lewis said “The world does not need more Christian literature. What it needs is more Christians writing good literature.” I think this applies to music as well. I’m doing what I can.

Miranda ~ In what way has your perspective of the industry changed since you became a professional? How has this affected you personally?

Matthew: When you’ve been an active artist yourself for a while and meet some other artists who are well-known, you realize that these people, who most would look up to as very extraordinary, are really just normal people. People put famous people on this pedestal where they think something is fundamentally different about them compared to the average person. These people are actually like you, with emotions, fears, their own personal challenges, etc. Realizing this has helped me to not be shy or freaked out about connecting with other artists because “they’re too famous.”

Miranda ~ What do you hope to achieve with music?

Matthew: Big picture, my personal goals are to have my music heard and appreciated by as many people as possible and to tour around the country and meet a lot of people. On a more personal level, I hope that my music will really connect with people, that it will help them to feel and dream and think much more deeply, and that through my character and words, they’ll see that God is great and that Christians are not always whacky.

Miranda ~ What are you most grateful for generally and right now?

Matthew: I’m very grateful for the place God has put me in life. All these people who care about me and want the best for me—it’s the best thing anyone could ask for, and He just gave it to me. Right now I’d have to say I’m thankful for internet and fresh red raspberries, because those things are the best!

Miranda ~ What advice would you give to an artist just starting out in the music business?

Matthew: My advice to a new artist is first of all, to forget all the marketing advice and the extra busy work of being an artist and FOCUS ON THE MUSIC. You gotta make incredible music if you want to make it. The passion and the art have got to come first. After all, good music markets itself. If your music is something that people will freak out about and tell their friends, it will organically climb to the top on its own. If your passion is not in the music itself, in the lyrics, the beats, the guitar parts or whatever, then you belong somewhere else. So my advice is to make really awesome music. The rest has a way of taking care of itself.

THIS or THAT (The Fun Questions!)

Coffee or Tea? Coffee! But sugar and cream please, because I don’t want to drink dirt water.

Gym or Outdoor? Outdoor! Al naturale for me, please.

Sneakers or Boots? Boots? I’m not a superhero or a farmer…or a superhero farmer. Sneakers all the way!

Running or Walking? Running. Because you’ll get there much faster.

Cereal or Fruit? Fruit. It’s just so good, and so healthy, and so tasty.

Music or Books? I’d like to pretend I’m a bookworm because bookworms are all so cool and hipster, but realistically, I listen to music much more often than I read a book.

TV or Magazine?…Neither. Unless Netflix counts as TV.

Summer or Spring? A couple years ago I would’ve said summer. But it’s just so crazy hot right now. So, I say, spring.

Rain or Snow? Not a huge fan of either (I know, I know, you’re mad at me for that), but I’d take rain over snow. I’ve become a real Scrooge about snow and winter.

Blazer or Leather Jacket? Leather jacket all the way!

Thank you, Matthew, for visiting today!

I grew up in a small town in Michigan. I wasn’t especially interested in music as a kid, but that all changed at age 12 after learning guitar and jamming with my brothers for a while, when music really “clicked” for me. I began writing and recording my own songs on the family computer, and slowly got into making electronic music. Fast forward 10 years, and I’ve released a good plethora of many styles of music and garnered attention not only for my original music, but also for my remixes of Capital Kings, Lecrae, Andy Mineo, Jonathan Thulin, and more. With a growing number of fans in the States and a small army of fans worldwide, things are looking up and I’m enjoying every little bit of this crazy adventure (from official website).