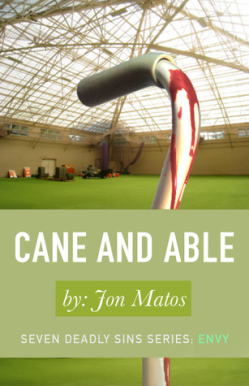 Loosely based on the life of author Jonathan Matos, a near death experience turns a mild-mannered young man’s ambitions into obsessions.

Shortly after a brush with death on the operating table, Dennis Caine is convinced his survival means he is destined for greatness. But as Dennis grows into adulthood, his attempts to win the affections of his best friend, Beth Michaels, the praise of his parents, and the accolades of football star Jason Bell consistently fall short. Jason is a high school football star and the son of a grocery store magnate, who longs for the kind of respect Dennis takes for granted. Their rivalry quickly escalates from petty pranks to kidnapping, arson, and a matter of life and death.

Cain and Able is a story of a young man’s journey that highlights his perception of his identity through the events of his life in comparison to those around him and the world at large, as well as his opinion of who God is through eyes of disappointment. The main character, Dennis Caine, begins his story as a young boy with a rare medical condition that leads him down a difficult path travelled by few people his age. His faith, in the long, is deeply affected, and his identity, shaken. But through gruesome events, he finds his way back to the truth. Dennis, in the end, finally submits that “Life is simple.”

It is clear that Matos, the author, composed Cain and Able to help lead people to the truth that identity is found in God, and not in looks, achievement, or camaraderie with any group of people. The penmanship is impeccable, the plot, well-paced, and the characters are as interesting as they are unique with a bit of queer to the mix. The story, however, though engaging enough, is bittersweet from start to finish, and so lacks the exciting thrill that most readers hope to experience after a good read.

*Though I offer this review to the public, it is my opinion and simply that. My appreciation to the author, Jonathan Matos, for a free copy in exchange for my honest opinion.

Jonathan Matos is a publishing army of one. His first novel, Cane and Able, is based on his near death experience at age 11, shortly after a routine scoliosis repair. Jonathan also lives with central core disease, a rare muscle condition. Both conditions are explored in ‘Cane and Able,’ the first in a forthcoming series based on the “Seven Deadly Sins.” Each entry in the anthology will explore a different period in America’s dark past, ultimately contrasting the heartache of human error with the redemptive power of the gospel. Jonathan lives in Philadelphia, Pennsylvania.