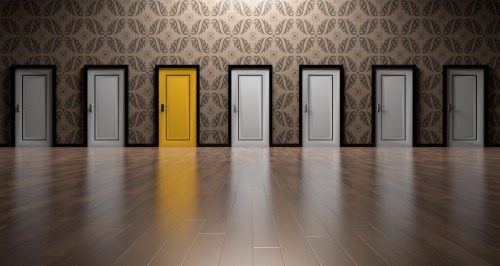 When Jesus was on earth, He often made literal statements and replies to His disciples’ questions, that they didn’t understand. Sometimes it was because He kept understanding from them until they were mature and prepared enough to understand (like when He first predicted His death, Luke 9:43-45), or they simply couldn’t accept His words because they sounded too “wonderful” or overwhelming to be true (like when He predicted His second death, Matthew 17:22-23; and when He was going to raise Lazarus from death, John 11:11-16). The greatest example of this, of course, is their assumption that He’d come to restore the earthly Israel kingdom and overthrow the Roman Empire (Acts 1:6-8), when in fact, the prophecy from God clearly stated that Jesus’ purpose on earth was to “save His people from their sins” (Matthew 1:21; Luke 2:29-32). Since their minds were fixed toward a particular dream that they wanted Him to fulfill, His words often contradicted their expectations, and so collided with their dreams and created a chaos of confusion, because His words would not reconcile and co-exist with what they wanted.

In my personal walk with God, I’ve experienced the same thing. I ask God a question about a path I’m on, and I get an answer that I don’t understand, sometimes, because, like the disciples who had fear (Luke 9:43-45), I’m not yet ready to receive it, and God has to work on my heart to remove the debris (fear, pride, anxiety, unbelief etc.) that occupy space and get in the way of me fully receiving His Word in the way that it will bless me and those He’s given me. Other times, it’s because what I hear, though I perceive to be true, seems too “wonderful” or overwhelming to be real, since I still see reality or myself through a particular lense too small to fully embrace what God is saying to me; this, too, requires a working on my heart, if I’ll fully receive God’s Word given to me.

What, then, do you do when you’re on a path that seems to be going in the opposite direction of your dream, and you find yourself disappointed in God because you thought His promise to you led you down that path, to that dream that doesn’t seem to be coming true? Has God lied and deceived you, you ask, but yet, perceive Him nudging you on in the direction of a difficult path you don’t understand, and because you’ve come too far, you’ve kept going and can’t turn back? The Prophet Jeremiah felt the same way (Jeremiah 20:7-18), when, in fact, God had made a promise that didn’t bely the sorrowful events that he eventually encountered (Jeremiah 1:17-19); one thing we must understand about God’s promises is that they are often layered with details and events that we don’t know beforehand, but work according to the counsel of His will (Ephesians 1:11, Proverbs 19:21). He knows things about your life that will play out for an expected end that you don’t yet know. The Psalmist, realizing these things and probably contemplating running from his path, thought to himself, “where can I go and hide from God?” (Psalm 139:7). Seeing a revelation of the God who knew all about him beyond what he himself even knew, exclaimed and said, “Such knowledge is too wonderful for me; it is high, I cannot attain it” (Psalm 139:6). And then went on to praise God, being comforted with the truth that since God had carefully formed him and written all the days of his life before he was even born (Psalm 139:14-16), as long as his eye was on God, he would not lose his way to everlasting life (Psalm 139:23-24).

So what do you do when you find yourself not understanding a path you’re on and God has provided a [literal] answer or reply that keeps coming up, but you don’t understand this answer, or you subconciously resist what you see, because you are too afraid of what it implies—because, for some reason, your soul is overwhelmed by what it’s been shown?

You ask God to prepare and expand your soul until it is wide and deep enough to receive what He has shown you, because, in your heart’s current state, it is an old wineskin that will burst if new wine is added to it; the old wineskin cannot expand to hold the new wine, and so you’re unable to receive what you see. Ask the Holy Spirit to renew your mind with revelations of God’s love and glory that will broaden and deepen you enough to receive the meanings behind God’s mysteries, or your heart will end up in unbelief or disbelief, and you won’t be able to go any higher with God. Bear in mind, though, that the expansion of your soul requires emptying of things that will lead to death of self and control; such things include fear, pride, anger, bitterness, envy, jealousy, unforgiveness, lust, anxiety, false guilt, false confidence, false importance, disappointment, despair, self-pity etc., and He will replace them with a deeper understanding and greater measure of faith, hope, love, grace, trust, righteousness, holiness, thanksgiving, and peace (and you will have to do this often no matter the level that God takes you to throughout your lifetime). It’s in the midst of increase of these things in your soul that your eyes will be opened more clearly to understand God’s mysteries and receive the life and blessings that come from His spoken Word; it’s innthe midst of these thongs that you’ll see God more clearly, for it is the pure in heart that will see God (Matthew 5:8). For instance, if you choose pride, anger, bitterness, unforgiveness and disappointment over Thanksgiving and peace, it will darken your heart, and you will lose sight of who God really is (Romans 1:16-32), as well as the gifts that could have been released at the end of your trial (James 1:12); but in the place of Obedience and Thanksgiving, there is a revelation of God, His glory and His will (Matthew 3:13-17; Luke 3:21-22; Epehsians 1:15-23), a leading toward the next step to take (Matthew 4:1; Luke 4:1), as well as the power and grace for what will follow after that step (Matthew 4:11). For Jesus, He didn’t only receive a revelation of God and a spoken Word that confirmed who He believed he was, at the end of the temptation, He was ministered to by angels, and He received power to begin His ministry.

What questions have you asked God, and what reply has He given you that seems too “wonderful” or overwhelming for you to comprehend? It is important you answer this question and acknowedge where you are, so that you can begin the journey toward Blessed Understanding. Like the disciples, what you learn may require you to lay down an old dream or path and begin a new one aligned with what He had in mind all along or you may be launched into a waiting season of testing and sanctification, in preparation for a new path. Whether you receive a new dream or are put in waiting, on this new path of obedience, one thing is for sure: you will receive revelations of God and who you are in Him on whole new levels that will dive you deeper into Him. And the deeper you dive, the more you’ll realize that it’s not just about you, it’s about God and the Living Body of Christ. God’s spoken Word, even the literal replies, are ALWAYS bigger than you and larger than life as you know it.

Miranda A. Uyeh is the founder and editor of To Be A Person (TBAP), the author of Christian Romance/Suspense fiction, To Die Once: Child of Grace #1, a Mogul Global Ambassador, and a screenwriter. She was a one-time shortlisted judge for the Inspy Awards, in 2014, in the Contemporary Romance & Romance/SuspenseCategory. In 2017, she was invited by actress, Jenn Gotzon to become one of contributing writers for the forthcoming and highly anticipated Christmas comedy movie, The Farmer and the Belle, presently in production. In 2018, Miranda was invited by Waterbrook Multnomah to be one of book bloggers to be part of a special launch team that helps launch its elite authors whose books have been listed as bestsellers on the New York Times Lists.

*The article, Conversations with God (Part 2): Literal Reply, first appeared on To Be A Person (TBAP).